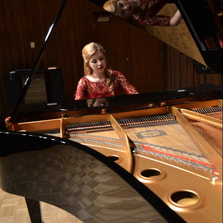 Beginning her Suzuki piano studies in 2001 at age 6, Lauren Dornbirer has a passion to share the gift of music with the next generation. She received a piano pedagogue graduate assistantship from Butler University where she is currently studying under Dr. Kate Boyd in fulfillment of her Masters of Music degree in piano performance. Graduating cum laude, Lauren obtained her Bachelor of Arts degree in music from Pensacola Christian College in 2019 while studying with Mrs. Daisy Jaffé, Conservatorio Musical “Carlos Gomes,” Brazil, A.D. She was completed Suzuki Piano Book 1 and Every Child Can training with Rita Hauck and looks forward to completing all levels.

She attributes her musical career to the strong support of her parents and teachers as well as the Suzuki philosophy that “Every Child Can.” During her formative years, Lauren received consecutive unanimous superior ratings from the Federation of Music Clubs, and was a state finalist in the Ohio Music Teachers Association Buckeye Auditions in 2005, 2007, 2011, 2012, and 2013. She also won the center awards for The Royal Conservatory in Grades 2, 4, 5, 6, 7, 8, and 9 and the state awards in grades 5, 7, and 8.  She has taken theory, music history, and harmony tests and plans to complete her A.R.C.T. degree in the near future.  Additionally, Lauren was ranked in the highest 5% in the country from her Grade 9 results, and was invited to audition for a broadcast in Carnegie Hall, hosted by the PBS program, “From the Top.” She also participated in the National Guild of Piano Teachers, receiving her high school diploma in social music in 2012 and high school diploma in 2013. In 2012 Lauren was awarded the George Haddad Memorial Scholarship for summer music study as well as an Ohio Music Teachers Association scholarship from The Royal Conservatory exam results. Her love for teaching began while teaching privately in high school. Since then, she has also had experience with group class teaching and private tutoring.
​
In addition to piano pedagogue, Lauren enjoys collaborating with instrumentalists and vocalists as well as performing classical and sacred music.
​